Cell-cell interactions affect many aspects of cell behavior, including growth, differentiation and the establishment of normal tissue architecture. Loss of expression or function of components present in cell-cell interactions has been found in carcinomas and correlates with poor prognostic outcome in cancer patients. Cells have several mechanisms for linking to their neighbors. These so-called "cell junctions" consist of proteins that assemble into different structures such as gap junctions, tight junctions, adherens junctions, desmosomes and hemidesmosomes, each with specialized functions. Cell-cell junctions of the zonula adherens are prominent in epithelia and are rich in transmembrane adhesive receptors known as cadherins. The cytoplasmic tail of cadherins binds numerous proteins that serve as molecular couplers, linking cell surface adhesion and recognition to both the actin cytoskeleton and cell signaling pathways. A major focus of the work in my lab is to understand cellular mechanisms involved in assembly and maintenance of cell-cell adhesions by examining the function and regulation of proteins recruited to the cytoplasmic face of cadherins.

A second focus of our laboratory is to understand how dysfunctional adhesion receptors contribute to tumor cell survival and metastasis. Melanoma is the only cancer whose incidence and mortality rates are increasing. Melanoma is an unusually lethal cancer as it metastasizes early and is highly resistant to all standard chemotherapeutic agents. Integrins, the major cell surface adhesion receptors of mammalian cells, play well recognized roles in regulating melanoma survival and metastasis. There is strong evidence that increased expression of integrins in melanoma cells drives metastasis and resistance to chemotherapy. Unfortunately, the mechanisms by which integrins fuel melanoma resistance are not well understood. We have identified a novel peptide that targets integrins from within the cell and sensitizes melanomas to chemotherapy. We are elucidating the novel mechanism of action of this peptide and its potential to be employed to overcome melanoma resistance so that new combinatorial methods for treating melanoma patients can be developed. 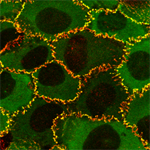